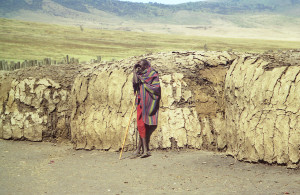 The Maasai are a big attraction in East Africa. Three volunteers and I paid $6.00 USD to enter into this particular Maasai settlement. Once inside, I saw many other tourists taking photographs and buying jewelry and other souvenirs. When someone told me there was a school in the back of the compound, I went there to take a few pictures of children learning their numbers. As soon as I was walking out, the teacher came running after me, asking me to donate money to the school. I refused gracefully. I questioned how authentic was this Maasai settlement. My guide, later, told me that the Maasai learned to use their uniqueness, or more so, their strangeness as a mean to make money, and sometimes people would dress up like a Maasai to fool ignorant tourists.